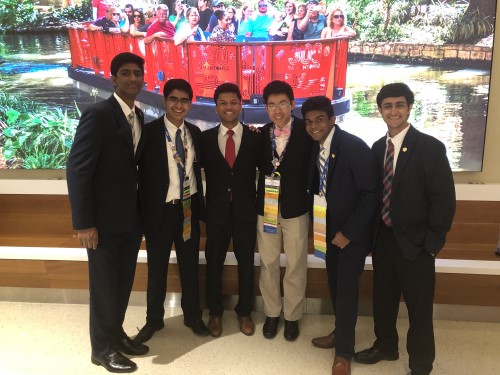 When I first entered high school, I chose to take Intro to Computer Science as my elective, but due to a schedule conflict I ended up taking Intro to Business and Technology, and my teacher just happened to be the FBLA sponsor, Ms. McCall. I joined the club with her encouragement and no idea what to expect. Although my brother had placed fist in the state in an online test, he did not participate in any conference, so he was unable to provide much insight. My friend Adit and I attempted to compete in Computer Simulation and Game Programming, but we did not end up completing our game and that was that. Just like all freshmen, I had joined a multitude of clubs and was still deciding which to pursue. I thought all hope was lost, but soon before testing began for SLC, my teacher notified me that she had signed me up for Intro to Business Procedures, as she believed that her class prepared me well for that test. I went into the test with minimal prep, only a few hours of prep the night before. Soon after I forgot about the test, and went about with my life. The day of SLC results, which I chose not to attend as I was not presenting, my friend unexpectedly told me that I had placed fourth and made it to nationals! Ironically, the only other freshman who qualified for nationals was Adit, who I failed to qualify to state with, and got fourth as well. I also found it amusing that a 64 on the state test was enough to place fourth at state, but I was not one to complain.

NLC 2017 was held in the beautiful city of Anaheim in California. The day we arrived, we spent our first hours loafing around waiting for our rooms to be ready. At around 4pm, the rest of the Northview kids chose to go to Disney, which was a mere two streets away from our hotel. However, Adit and I chose to go to downtown Disney for free instead, as the price for Disney was around $80 for half a day, and we found that quite absurd. Downtown Disney was the only attraction that was within walking distance from us, we ended up going there multiple times throughout the trip, even watching Despicable Me 3, with our roommate Andrew, one of our two roomates from Alpharetta, and POTC Dead Men Tell No Tales at the AMC there. Besides Downtown Disney, the only other memorable experiences included eating lunch at Taco Bell 4 days in a row and buying a $25 Subway gift card for $24 (what a steal), that ended up expiring before I used it up. Competition wise, Adit and I spent a day studying in the Georgia study room, and both ended up placing sixth, in Intro to IT and Intro to Bus. Procedures, respectively.

As sophmore year rolled around, Adit and I decided to take FBLA seriously and made it our high school goal to attend FBLA NLC all four years. I chose to compete in Intro to Business, which was similar to the event from freshmen year. Another reason I chose that event was because intro events are only open to freshmen and sophomores, which gave me an easier playing field. After much more prep than freshmen year I came first at SLC, which I yet again did not attend. I also placed seventh in Intro to Financial Math. Adit, being the genius he is, won both Intro to Bus. Procedures and Networking Concepts. NLC 2018 year was held in Baltimore, and our school decided to charter a bus. The day we were scheduled to leave, the bus showed up with broken air conditioning, which delayed the trip by a few hours as a replacement bus arrived, but we still took a stop in D.C. We stopped by the usual, including the Smithsonian National Museum of Natural History and the Lincoln Memorial, but sporadic rain forced us to cut our visits short. Baltimore was nowhere near as high end as Anaheim was, but nevertheless was a great city. Over the week, we visited the nearby river multiple times, even going paddle boating, where I met the Iowa state president. Our Northview chapter even attended an Orioles game, although the Orioles didn't score a single run until after we left, and ate at Fogo De Chao, a fine dining Brazilian steakhouse. My friends and I visited other attractions, such as Edgar Alan Poe's grave, and an open market where we had a great lunch. The only downside to Baltimore was that it was slightly more sketch with homeless people roaming the streets at night. Two days of intense studying was enough to give me first place in the nation, while Adit placed second in Intro to Bus. Procedures.

As junior year began, Adit wanted to go to SLC. With that in mind, we took on a presentation event, as people who presented were required to attend SLC. After pondering over the various presentation events, we chose PSA, Public Safety Announcement. The topic for the event was, "Develop a public service announcement that explains why “Soft Skills” in the workplace are important to employers in your community." For our presentation we decided to interview two business leaders, and subsequently interviewed our principal and the HR director at our local Chick-Fil-a. After squeezing through regionals, we remade the video and perfected our presentation. Part of our prep involved practicing in front of our advisor three times a week the month before the competition. Going into the competition, we were quite confident that we would do well. A one round competition, our presentation went according to plan, except for a small technical issue. To my surprise, we only placed fifth, and only top four made nationals. My partner Adit had placed first in his backup objective test, but I did not place, so I began to accept that I was not going to nationals. The week after my advisor notified me that a team who had placed above me had also qualified for another event, and I had a sliver of hope. After a few weeks, no team had dropped, but I was offered a spot on a superteam. The event I chose to compete in was entrepreneurship and I was partnered with two kids from Denmark High School.

Before NLC 2019 began, the only prep I did was read a textbook that I picked up from one of my partners. At NLC, we breezed through the first round objective test after a day of studying. However, the biggest obstacle that I had faced up to that point was the case study. Before NLC, I had never done a case study ever, and my teammates had only done one, at SLC. During a case study, each team gets 20 minutes to prepare a 7 minute presentation. Having never done this before, I started from scratch. After the two days of grinding, my team felt a lot better then when we first met, but we still were not confident. The case study we faced was about a marmalade and jelly business looking to expand. While my teammates thought we did above average, I was not so convinced. After anxiously waiting for two days, I was devastated after not making it on stage. Top ten make stage, and sixteen teams made finals, which means our presentation was simply not good. I spent the most time at NLC 2019 out of the NLCs practicing and studying for my event, but I still toured and had a great time with my friends. The riverwalk, a short five minute walk away had an amazing vibe to it. The most memorable part was the food. We had breakfast tacos at La Villita, beef, cactus, beans, rice, and salad at La Jalisco, a lamb burger at Yard House, a patty melt at Whataburger, pulled pork at Schilo's and wings at Hooters. Besides this, the main reason I enjoyed this NLC as much as I did was the fact that I hung out with seniors. The previous two years I only chilled with people in my grade, but this year I hung out with the three seniors who had attended the conference. Chatting with these seniors gave me an insight to senior year and other perspectives I don't experience myself. I also learned all about what state officers and national councils do, as the seniors had firsthand experience serving in them. Super Mario Maker 2 released during this conference as well, and Adit and I spent countless hours grinding it on his switch. Him setting alarms that would never wake him up but wake me up and calling friends until 3 am were some other small memorable experiences.

As senior year approached, so did senioritis, and I wondered if we'd be able to achieve our goal of all four nationals. We thought we had a simple path to nationals. After getting fifth in PSA the year before, we thought we'd compete in that event again. However, despite putting considerably more effort into our video for regionals, including interviews with our principal, a bank owner, and footage of Georgia Tech and Atlanta, we didn't qualify from regionals. This shocked both of us, and we turned to our backups. I had placed first in Computer Applications at regionals, and continued at state with that, adding Organizational Leadership as well. Adit chose to compete in Agribusiness and Cyber Security. We intended on attending the second day of the state conference to hang out with our friends and stay for awards, but due to the coronavirus, SLC was cancelled, and perhaps NLC as well.

As senior year approached, so did senioritis, and I wondered if we'd be able to achieve our goal of all four nationals. We thought we had a simple path to nationals. I also applied to multiple national councils but was unable to gain any positions. After getting fifth in PSA the year before, we thought we'd compete in that event again. However, despite putting considerably more effort into our video for regionals, including interviews with our principal, a bank owner, and footage of Georgia Tech and Atlanta, we didn't qualify from regionals. This shocked both of us, and we turned to our backups. I had placed first in Computer Applications at regionals, and continued at state with that, adding Organizational Leadership as well. Adit chose to compete in Agribusiness and Cyber Security. We intended on attending the second day of the state conference to hang out with our friends and stay for awards, but due to the coronavirus, SLC was cancelled, and perhaps NLC as well. I ended up getting 7th in Computer Applications.

Thank you FBLA for all the memories. I will cherish all the moments and friendships I made, from interviews with local business people to SLC in downtown Atlanta to NLC.